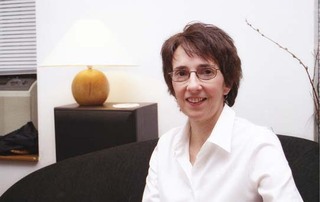 Cynthia L. Cooper (Cindy) writes a range of long and short plays, united by a passion for human rights and justice, stylized staging and a mixture of comedy and drama. Her plays have been produced in theatres and venues across the U.S., Canada and in Europe.

In Running On Glass, a scholar and her running buddy, one African American and one white, envision a women's sports museum, bringing to life women from history, including Althea Gibson, Babe Didrikson, Gretel Bergmann, Mamie 'Peanut' Johnson, Wilma Rudolph, and Gertrude Ederle in unique dual monologues. The play premiered at Venus Theatre in Maryland, with readings in New York at Ego Actus Theater, New York Summer School of the Arts and elsewhere.  An earlier version for one person, How She Played the Game, was produced off-Broadway by The Women's Project and separately by Primary Stages, and in theaters in more than 100 other locations including Reno, Boston, Vancouver, Los Angeles, Montreal, Helsinki and Budapest. It was excerpted on a Lifetime TV spot and included in five anthologies, one of which is Women Heroes (Applause). A version for elementary students, Go, Girl, Go has been received enthusiastically in schools and community settings.

Cooper's plays touch a range of subjects. Strange Light, produced at Wings in NY, Bailiwick in Chicago, in Philadelphia and Buffalo, involves a woman who struggles with light and dark, studying the history of illumination at the same time that she tries to capture information from her mother's failing memory and hold together her own relationship. Of the play, critic Stewart Benedict wrote, "Cooper is a graceful and skilled writer."

Silence Not, A Love Story published by Gihon River Press, immerses audiences in the courage and danger of a Jewish woman and Catholic man who raise their voices against the rise of the Nazis in the early 1930s in Germany -- and survive to tell about it. "Powerful, poignant and penetrating," wrote Michael Berenbaum of American Jewish University. The play opened at Center Stage Theatre in Jerusalem in April 2010 and has had readings at The Anne Frank Center USA, Wellstone Center (MN), Primary Stages (NYC) Anne Simley Theater (Hamline Univ.), Geraldine Page Center for the Arts, Poconos Playhouse in conjunction with East Stroudsburg University. It was a finalist in the ForeWord independent press for best drama and a finalist for the Original Playwright Series, Shawnee Playhouse, and was twice the subject of signings at the U.S. Holocaust Museum in Washington, D.C.

Heaven Scent, a one-act play about a gay couple that is trying to adopt a child but encounters the prejudice of a storeowner, was presented at the New Circle Theatre Company in the Sandbox.

The Outermost House, was performed by Marvin Einhorn (RIP 2014) at the Cape Cod National Seashore, Primary Stages, Backstage in Portland, Oregon, The Culture Club (NY) and in November 2014 as a tribute to Einhorn in a two-person show in L.A. under the direction of Catherine Roskam. The play shares the elegiac experiences of author Henry Beston, as he counteracts the trauma of war with the meditation of nature. A new, commissioned full-length play, Stones of Tiananmen, is about struggle  of nonviolence advocate, Liu Xiaobo (Nobel Peace Prize winner), for free speech and democracy in China. It was a Finalist at the Kitchen Dog Theatre New Works Festival, SemiFinalist at the Bay Area Playwrights Festival and Play Penn in Philadelphia. It was presented in workshops or concert readings at Urban Stages in NY and HBO.

Sisters of Sisters about the alternately charged and warm relationships between three pairs of sisters, was a winner of the Hutchinson Festival of New Plays, and produced in New York, Kansas and Minnesota. Cooper's drama, Slow Burn, a finalist in five playwriting awards for its tale of entanglement between two teen boys and an elderly neighbor, was produced at Wings in New York under the direction of Michael Warren Powell. Strange Bedfellows describes how a single issue - pornography - enters and then takes over the campaign of a woman politician. Produced by the Women's Theater Project in Minnesota, which commissioned it, it was a finalist at the O'Neill Theatre Conference, and presented at West Coast Playwrights Festival. Walls about a woman prisoner in the U.S. with radical politics describes her life-saving connection to a gay male from her childhood, and was a semi-finalist at the O'Neill Theatre Festival in 2006; read at Julia's Reading Room of the League of Professional Theatre Women in 2015. Second Sight, a full-length play, looks at the issue of truth through the endeavors of Gerard Croiset, the "Mozart of psychics." It has had readings at The Hive in NY, 29th Street Playhouse, Theatre Beyond Borders, and other venues, including in the Chicago area. Words of Choice, a compilation of several writers created by Cooper, has toured to 100 locations and 20 states, and is published in "Front Lines: Political Plays be American Women" (New Press). A second compilation began touring in 2008 and was lived streamed to dozens of venues as part of the first WiredArtsFest. In 2014, Cooper produced a live performing walk with 12 actors, the Reproductive Justice Walking Tour, in New York City, and in 2016, the Reproductive Freedom Festival.

Cooper's one-act plays have won particular praise for their richness and compactability. Many present unconventional characters in complex situations. Sentences and Words, published in a volume released by the Women's Project and Productions in New York, and performed at the University of Washington and a dozen other schools, finds two women -- a defense lawyer and the mother of a victim -- grappling with the death penalty. In Works of Art, winner of the First Prize for Playwriting at Pen & Brush and other awards, a woman sculptor interviews women for an elusive position, but is drawn only to the candidate who can recite poetry. Beyond Stone tells how the father of a firefighter and a woman artist, both at a loss for words after a devastating fire, connect through art. Others are powerful stories of a woman who runs a shelter for women (The Dwelling Place, a winner of the Malibu International Short Play contest), a television reporter who reaches for black humor instead of dealing with her breast cancer (Mountain, a finalist at Louisville); modern day witches who clear a workspace of negativity (The Accounting Department); a DNA scientist determined to prevent the desecration of Elvis (Saving Grace, published in Elvis Monologues); and the story of Wilma Rudolph, Olympics gold medalist, in Olympic Dreams. Entrepreneur was produced at the Chain Theatre in New York, part of The Inferno Project of the New Circle Theatre Company.

Another series of plays deliver uplifting stories to family audiences or young people -- the life of the inventor of the Braille system of reading for the blind (Louis Braille: The World at Your Fingertips) (co-author, published by Dramatics Publishing), nontraditional career options (Reachin', published by Holt); ways to counter prejudice (High-Five; This Lady Doesn't Stop) about girls who band together to combat bullying. Sor Juana, produced by Enrichment Works in L.A., tells the true story of a young Mexican woman in the 17th century with a burning desire to learn, and who becomes a visionary poet and writer, published by Indie Theater Now as part of the 365WomenAYear series.

She was presented a special citation in Providence, RI for Outstanding achievements as a playwright ... devoted to exploring the issues and challenges that mean the most to women, and presented with the Anne E. Fisher Champion of Choice Award for her work on women's rights and the VISION Award from the Abortion Conversations Project. Cooper makes her home in New York City, and is actively working on several theater projects.

She is an inaugural participant in the New Play Exchange Network, which makes select scripts available to people in the theater. Her plays are included in 16 publications (see Play Publications).

For more biographical info, click About here or at the top of page.

Playwriting awards and grants include:

~Putting Women in the Public Square: StatueFest Shifts the Narrative

~Why Bias against Creative Women Artists, Composers & Playwrights Falls in A Hole in the Law, Medium, Oct 2019
~Women, Words of Choice and the WiredArtsFest
~Some Solutions To the Problems Presented by the NYSCA Report on the Women in Theatre, Arts Wire 2002
~A New Guide To Holocaust Plays By & About Women, WomenArts 2016
~Recognizing Yom HaShoah with Women, Theater and Resistance to the Holocaust, Huffington Post
~"The Woman Who Said 'No' --Researching Resistance and the Holocaust," Women, Theatre and the Holocaust, Third Edition, Remember the Women Institute
~Reviews, New York Law Journal
~Review, Literature in Performance
~Sarah Jones: Bridge and Tunnel, Ford Foundation Magazine
~Articles, Newsletter, NY Coalition of Professional Women in Arts & Media; Women's Project & Productions; Words of Choice

ABOUT MY WORK: SELECT ARTICLES

~Determined Women, Podcast and interview by Coni Ciongoli Koepfinger (on YouTube)
~What Motivates An Activist, Lilith Magazine, by Eleanor Bader

Also See WHERE I'VE BEEN

or go to PLAYS-HOME above.